For the first time in a long time, I hosted dinner at my place. It was in event to my mother's, step-father's, sister's and her bf's birthdays. All of those dates plus the fact it was the first time back in the dinner party mode made it so that I wanted everything to be perfect. Hard lesson here, when you have tiny babies, dont plan shit LMAO.

In all honestly, it all went pretty smoothly. Almost the entire menu was right off Pintrest. The only picture I have is the table setting. 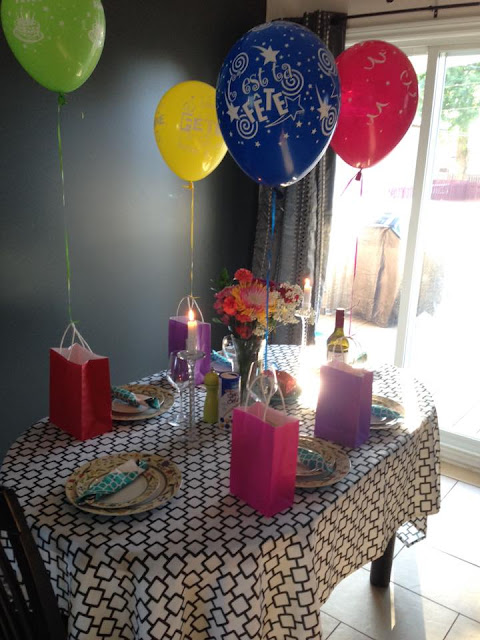 I made little mini gift bags with a jar of jam (8 cups mixed berry fruits, 6 cups sugar, 1 lemon zest and peel) with this in the form of mini loaves.

This soup was the starter, doubled it, added a few more carrots and forgot the garlic. Perfect amount of heat for us.

Then this meat (I used palette meat, no idea what the translation is) with the same veggies plus mushrooms. Doubled again. Awesome!

Paired with mixed greens and veggies, steamed beans, and fresh bread. Simple and delicious. I had really wanted to make the cake but realized that just wasn't happening, so gave in to a bakery cake which was delicious with mandatory ice cream and coffee.

It was a great night of happiness and family.

Y'all...I am so done with school. Stretched deadlines, stressed profs, my brain straight up going "NOPE" every Saturday morning in response to my waking up in a panic and shortly realizing "hey, it's Saturday! I don't need to wear pants or go to into the clinic...but I can study?"

Here is a stunningly metaphorical NOPE in picture form. 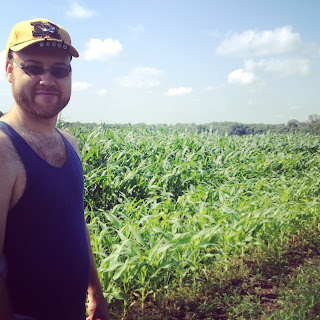 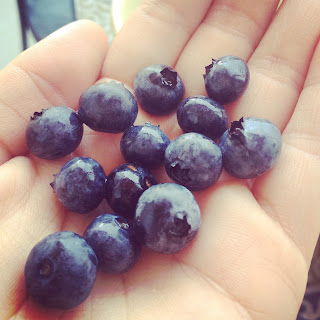 a family day and a picnic

This is a pretty ancient draft - There's a gorgeous meat & veg dinner Tony made, a chocolate cake I prepared, and a picnic I enjoyed with Julia a couple of months ago. I was putting off adding captions, but decided to just push forward into making it a wordless photo essay to break out of my inertia, hehe! If you have questions I will of course elaborate. 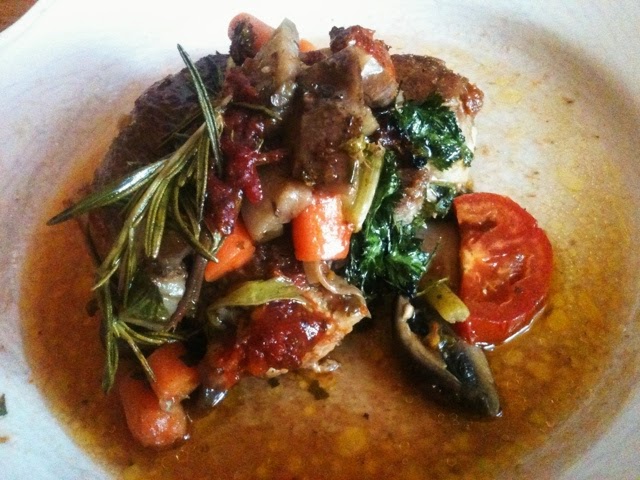 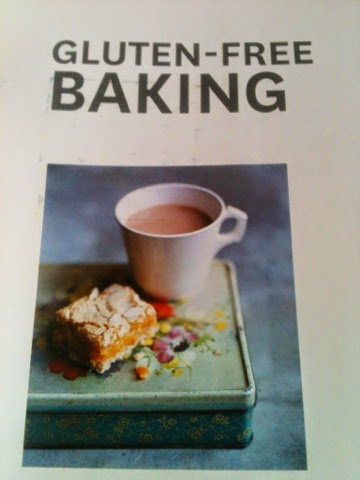 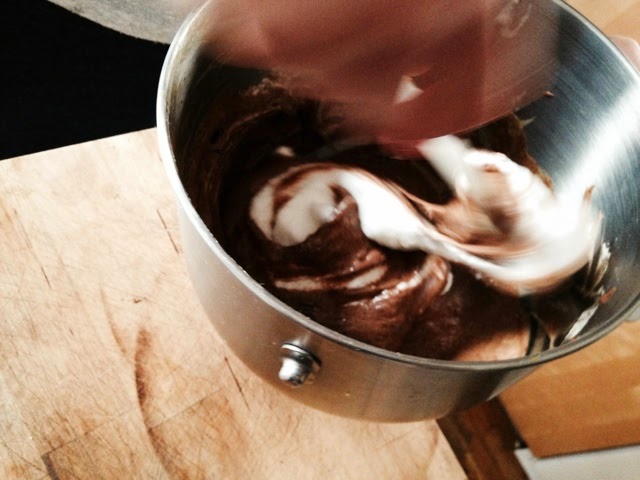 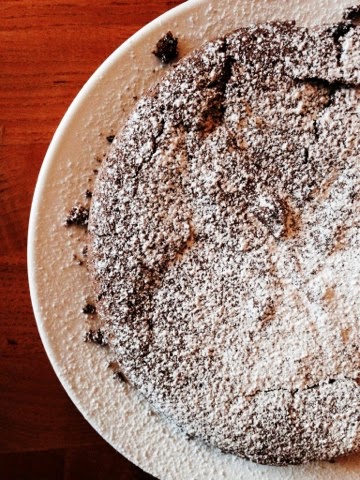 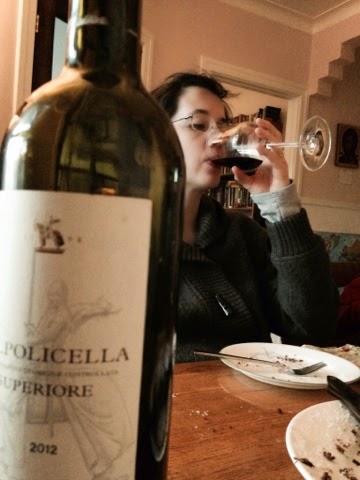 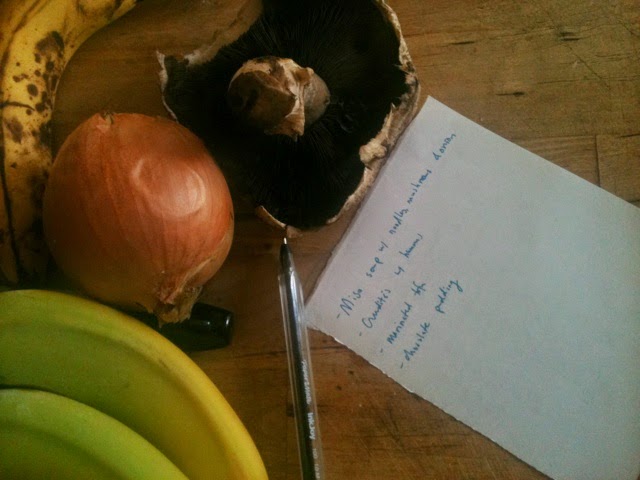 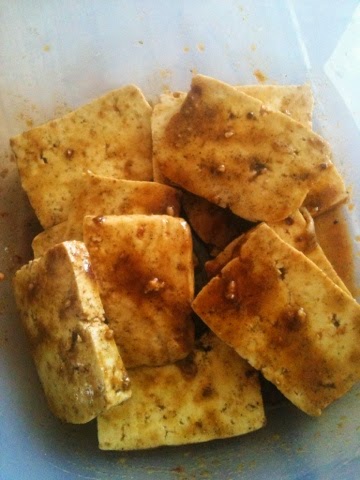 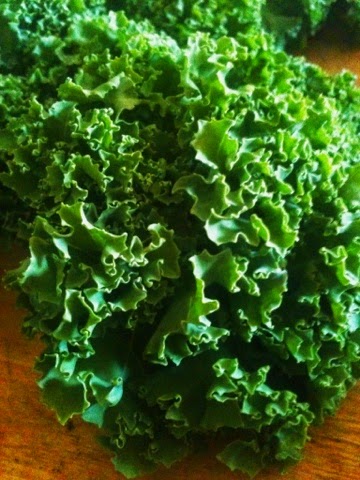 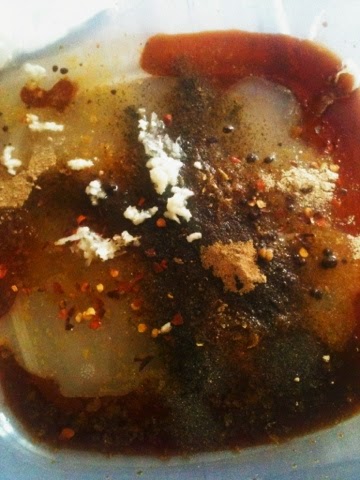 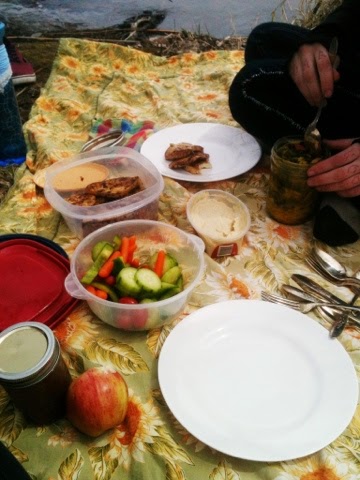 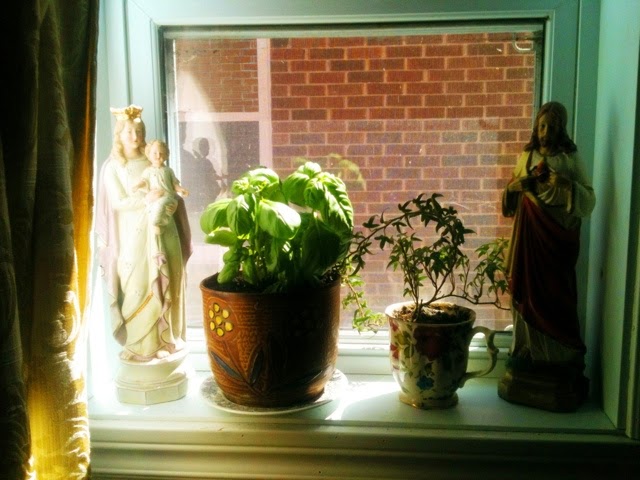 So, during our delectable brunch with Amy and Sam, we had talked about Mercier and I wanted to show picture wise where I go shop for food within Mercier. To me, there are two main places, inner and outer Mercier. If you dont have time to go in, a quicker more commercial stop is Fruiterie Mercier, which still carries local produce but mingles with all kinds of stuff, like a regular grocery store. Inner Mercier is where all the street side stands are, with the farms just a few feet behind them. So Fruiterie this post, and when next I go Ill show you some stands!


So, there's basically one main street in Mercier, which runs all the way through it onto the next neighboring city. Fruiterie is right at the beginning of that atreet, right off of the 30 cross at Chateauguay, you literally cant miss it. Its also right across the street of Mercier's closest thing to a health food store, Fantaisie du Ble (wheat fantasy), which serves all kinds of delicious products, my favourite being the vegetarian lasagna. I think they're even starting to sell some gluten free products which, trust me, is a wild and new idea for this place. You have to picture, when I speak of this town, that it is completely based on and thrives on its very old-fashioned farmer's lifestyle, which is 'we've always done it this way, why do it another way' type of mentality. Of course, like all places, there's new generations and new blood that comes to settle in the residential areas, so slowly it is acquiring 'new and modern' concepts. But a big part of me loves the fact that the old 'Habitant' mentality is still so much alive in most parts of Mercier, families know each other and have for a long time, and people are loyal to each other and to each other's commerce. All politics aside, it feels like you're stepping into a part of the past that is so stubborn even the Walmart that was built a few minutes away in Chats can't tear it down. At least, not for awhile. 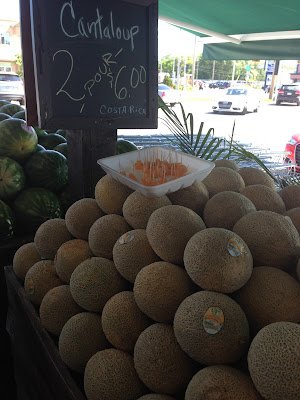 So even though it imports some of its fruits, its still sort of a new push for them, and they had taste samples for fruits like cantaloup, mangoes, and canari melons. Kind of felt like 'Hey look, we have this thing here, its called a maaaanngooooo! Exotic! Fancy! Try it!' They also very plainly write where everything is from, and of course promote the things that come from Qc as much as possible. 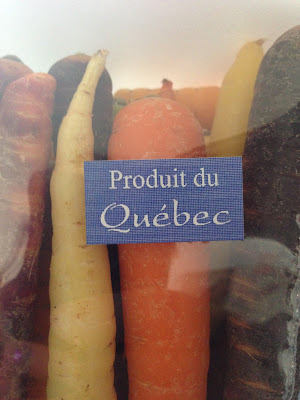 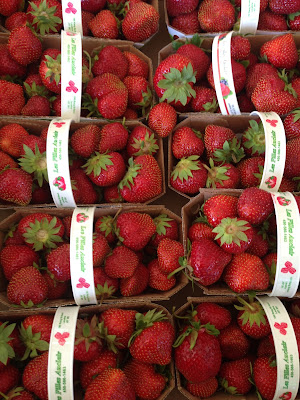 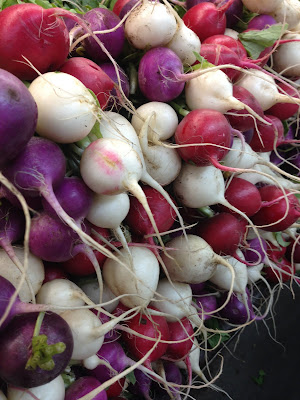 There wasn't much to take a picture of within, its a pretty standard establishment, a good 70% fresh produce, the back is a small butcher area, and an even smaller dry goods/breads/dairy area. But, it cant be a typical Qc establishment without these: 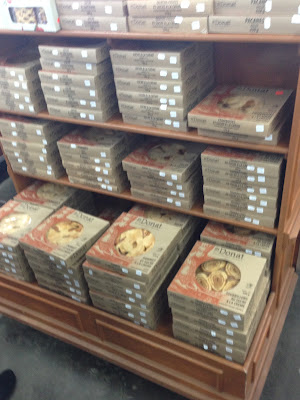 If you need your fix of sugar, dont want to make it, but want it to taste as close to homemade as possible, this is what you get. Traditional pies (mostly all made with sucre a la creme, which I still haven't found a good translation for) with the best thing ever invented, that box at the bottom right, the politically correct term for those is 'maple swirls'. Pffffff. Those are 'pets de soeur' or 'nun's farts'. We have the best names for things. Those are what Christmas is made of. I buy a box maybe once or twice a year and just cry at how good and full of memories those things are.

Back on track, right next to the Fruiterie is something I had to share, its their sister business but only during the warm months. Its like walking through a miniature Botanical Gardens and a veritable feast for the eyes. This is where you buy everything for your garden, from plantable fruits/vegetables/herbs to beautiful flowers and greenery. The staff have all been working there for years (minus a few kids for summer jobs) and they are so knowledgeable about everything that grows in the dirt, its wonderful. You could have hour long conversations with these people, if they didn't have a bunch of clients and a job to do LOL. But they take the time to instruct you on whatever you ask them about. I like to take a stroll through the aisles every week or two just to take the time to look at the colors and smells, its just quite lovely. 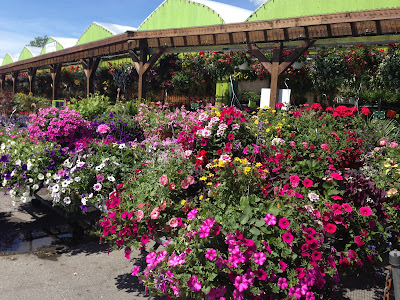 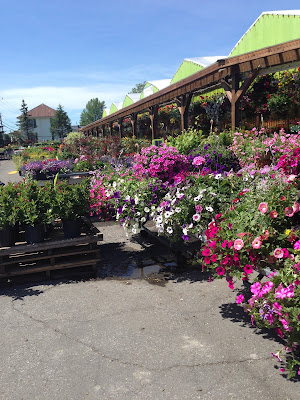 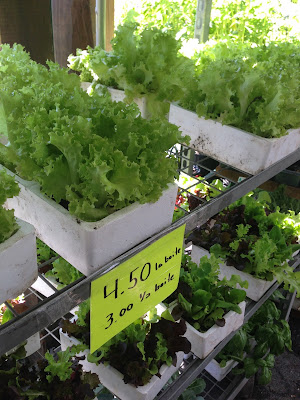 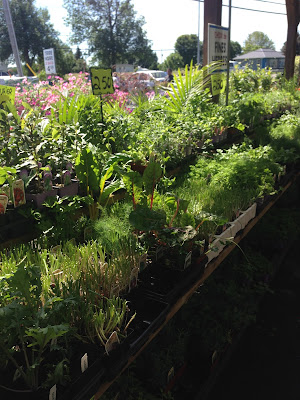 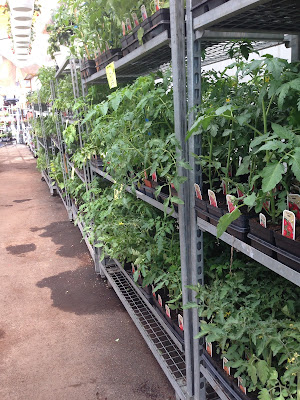 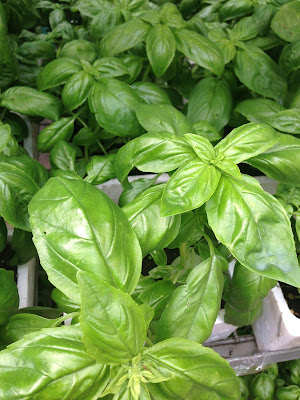 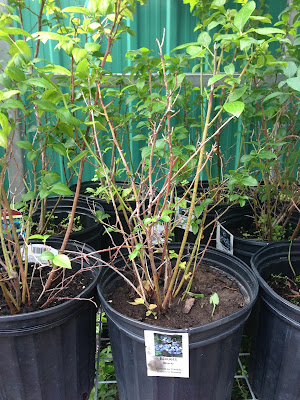 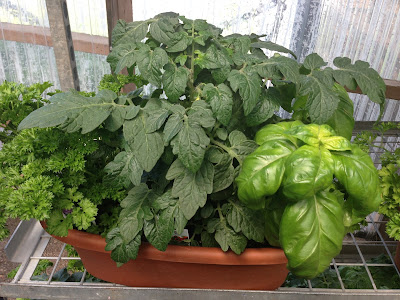 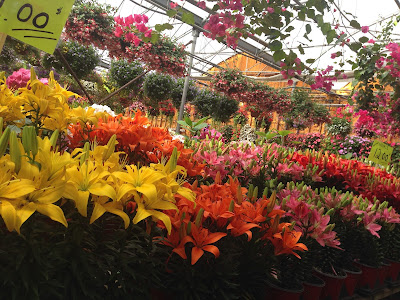 I will end this with the fact that I splurged and bought myself a hanging pot of 'Welcome home Gabrielle' flowers in anticipation of her birth ;) 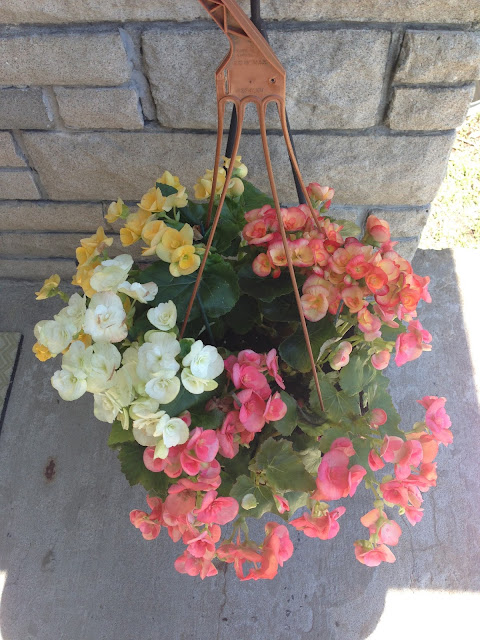